Brave by name and brave by nature, that is how the late great chaser Wicklow Brave will be remembered. One of the most versatile horses in training, Wicklow Brave’s remarkable career came to an end after a tragic fall in the 118th Grand National Hurdle Stakes at Far Hills on Saturday.

In a terrible twist of fate, Wicklow Brave was winning the race, just ahead of the Nicky Henderson trained Brain Power when he fell at the last hurdle. That resulted in a fractured right shoulder and sadly he had to be euthanised with his devasted groom, Jason Dear, by his side.

“I just couldn’t believe it. It went from pure elation to devastation. I know him inside out and I could see how well Paul [Townend] was travelling. He would have won,” Dear said on Sunday.

“I was just waiting for him to press the button. It was devastating. Given his age, it was probably his last foreign trip so it was heartbreaking not to have him coming home with me.”

It is never easy to lose a horse in any capacity, even in retirement. And rightly so, tributes have poured in for Wicklow Brave’s connections.

Warrior. Thanks for the memories, Wicklow Brave pic.twitter.com/jy0xELEtKW

Winning trainer of the race, Nicky Henderson said “He was such a good horse over the seasons and was as tough as they come. It was a case of two grand warriors doing battle in the closing stages but sadly one of them is not coming home.

“It was difficult to celebrate the win in the circumstances. My wife Sophie has been in touch with the Mullins’s and said how sad we all are.

“It was very much a bittersweet success for us as we simply hate winning races this way for obvious reasons.”

The 10-year-old had a glittering career which include his most recent three back-to-back wins in Ireland. He was also second in the Coral Cup earlier this year at Cheltenham. And that doesn’t include prior top-flight success over hurdles and Group One glory in the 2016 Curragh classic under Frankie Dettori.

Having run 59 times under race rules, Wicklow Brave had come home victorious in 17 of them. In that time he amassed winnings totaling over £940K. But more than all of that he was loved at the yard.

Willie Mullins said “I would like to pay tribute to Wicklow Brave who was a real legend in our yard. A career like his will probably never be replicated, going from bumpers to hurdles to to the Flat then chasing.

Thanks for all your kind messages about Wicklow Brave pic.twitter.com/HtFalAvM6F

“He was uniquely versatile and a legend for us, giving us some fantastic days and bringing us all over the world.

“He jumped spectacular the whole way and had the race won only to jump the last. He stood back at it, winged it, barely caught the top and fell down on his shoulder,” the champion jumps trainer added.

Jockey Paul Townend, who was riding Wicklow Brave at Far Hills said “Wicklow Brave was an unbelievable horse, and it looked like we were going to have great day.

“It is a tight bend (before the last) – but once I got him balanced again, he was starting to open up again. I thought I’d have won – and he is a big, big loss.” 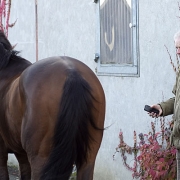