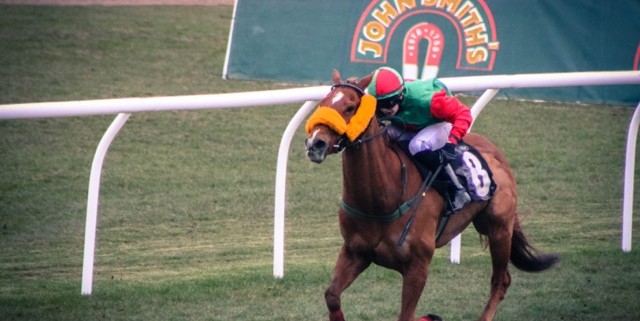 In March I was lucky enough to see our syndicate horse place in his very first race. He led from the start and as he approached the half way mark at the Uttoxexter course I got very excited thinking that he might win! Unfortunately, Frodo faded in the second half of the race. Nevertheless, it was a real thrill to see him running out in front and I was over the moon when he hung on for a place – I could only imagine what it would feel like if he had won. I think Indescribable is a word that would spring to mind.

Thankfully Polly Rodgers has described exactly what it feels like to watch your very own horse win. Polly’s syndicate horse ‘El Bravo’ won the 5.10 at Wolverhampton on the 13th Of May. You can read her full account of the win on the ‘Racing4Girls’ website. It’s gives a real insight into the thrill of ownership.

One day I hope to write a similar article about Frodo! I think my reactions will be very similar to Polly’s… “I screamed and screamed in William Hill shouting “ MY HORSEY JUST WON – I OWN THAT BOY ” at the top of my voice just so everyone knew! Granted – by this point I was getting some rather peculiar looks! To be honest, I just couldn’t believe what I had just witnessed. I was shaking, jumping for joy, crying all at the same time!” Congrats to Polly and ‘El Bravo’ – I hope he gives you many more great races.

If you’d like to join in the fun of racehorse ownership then shares in ‘El Bravo’ are still available via NottinghamshireRacing.co.uk, you can be an owner of this handsome son of Falbrav for as little as £125 and £45 per month. His record over one and a half miles is eye catching, he has won 3 times and been placed on 8 occasions.(8/12) ‘El Bravo’ also has his own twitter account, why not give him a tweet!

You can also follow El Bravo’s biggest fan (Polly) on twitter and be sure you check out more of her fantastic photos at www.pollyrodgers.com Thanks to Polly for supplying the photos of El Bravo for this post.